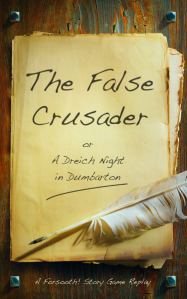 This is a Story Game Replay

A story game is a game wherein the players collaborate to create a new story together. Much like long-form theatre improvisation, the players come up with the story as they go along using the premise and structure provided by the individual game. Different games encourage the creation of different types of story. A ‘replay’ is a transcript of a session of play.

This game is called Forsooth!

Forsooth! is a Shakespeare-themed story game in which the players improvise the bard’s greatest lost work. It’s a game for 3-6 players and your first step is to decide on the overall themes of your play, then the setting and finally create the cast.

The story proceeds through a series of scenes, much like a theatre play or film. Forsooth! provides some guidance, but generally allows the responsibility for beginning each scene to move freely between the players to whomever has an idea for the next one. The game continues until, in true Shakespearean style, all the protagonists are dead or married.

To find out more about Forsooth!, or to buy to game, see http://spoiledflushgames.com/games/forsooth/